The development of new oncology therapies is routinely supported through the use of various xenograft models. Identifying the most suitable models for use in pre-clinical oncology programmes is key to establishing a successful translational R&D strategy. The models selected should not only represent the clinical pathology of the specific cancer but must also appropriately express the therapeutic target to ensure the specific mechanism of action of the drug is properly tested.

HER-2 expression, quantified using a 0 to 3+ scoring system, is currently used to diagnose the suitably of a breast cancer patient for treatment with Herceptin®. The aim of this collaborative study between Oncotest and OracleBio was to characterise, using IHC image analysis, HER-2 expression within FFPE tissue cores collected from multiple breast cancer xenograft models. Generation of such information would allow for more informed selection of specific xenograft models, aligned to the specific grade of clinical disease pathology in the target patient population, enhancing the chances of demonstrating pharmacodynamic effects and success in the clinic. 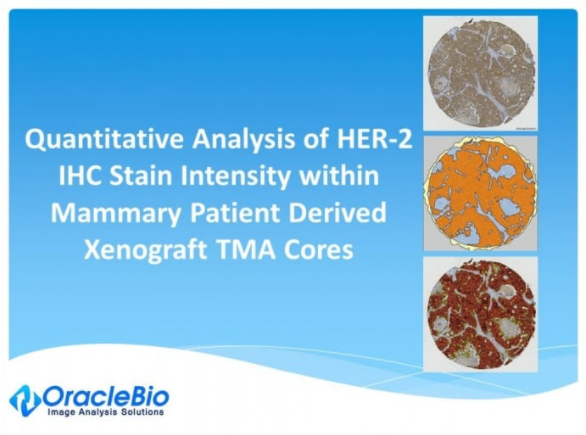 A Tissue Multi Array (TMA) containing 134 individual tissue cores, of which 22 paired cores were mammary cancer tissue collected from 11 different mammary patient-derived xenografts, was generated by Oncotest from their in-house in vivo model portfolio. HER-2 IHC was performed by Oncotest and a digital whole slide image was generated of the TMA for image analysis of HER-2 positive staining per core by OracleBio.  This involved the generation of a customised algorithm, developed using Definiens Tissue Studio® image analysis software, to automatically segment viable tumour regions of interest (ROI) from non-tumour ROI within each core. Simulated cells were formed around each nuclei present in the tumour ROI based on the presence of a membrane and each cell was classified based on HER-2 IHC membrane stain intensity as negative, low, medium or high. A H-score was then generated per core and an average H-score generated per xenograft sample. Example images of the IHC staining and quantitative analysis performed can be viewed in the associated presentation.