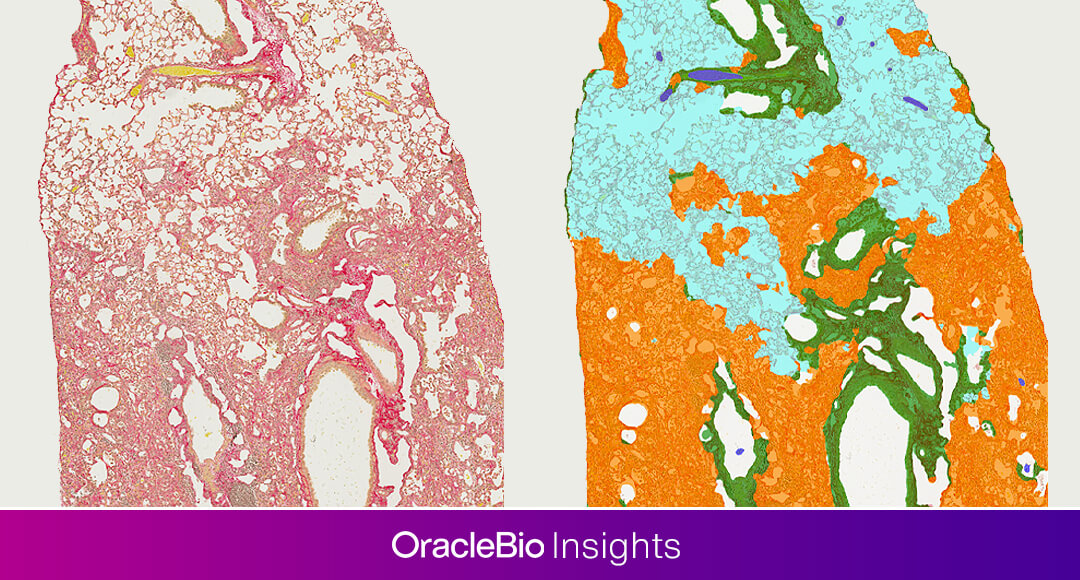 ⚡ Article Synopsis: In this article, OracleBio has come together with one of our partners, TherapeutAix, who provide strategic and operational support for drug development projects, to provide our collective thoughts on the use and value of the preclinical Bleomycin model in drug development for Idiopathic Pulmonary Fibrosis (IPF).

IPF is a progressive lung disease with an unknown cause, characterised by the deposition of extracellular matrix (‘fibrosis’).

The two approved drugs for this condition, Nintedanib and Pirfenidone, slow, but neither reverse nor halt disease progression and tissue remodelling. The specific disease cause is still unknown (hence the ‘idiopathic’).

Development of drugs that attenuate this disease has proven difficult, as it is unclear which of many mechanism(s) to target – that’s why many projects make use of the multi-mechanism ‘Bleomycin model’.

TherapeutAix has worked with many clients and providers on this model and can help with setting up the study in an optimal way. The design of the Bleomycin study needs to reflect the target mechanism, and the right dosing regimen is crucial. Different providers have their preferred model, and different pharma and biotech companies favour data from one over the other. There are also several challenges with the Bleomycin model itself.

First, and possibly most importantly, lung fibrosis in this model has a clear cause (the Bleomycin) and is not idiopathic, and of course fibrosis in patients could arise via different mechanisms.

Second, while IPF is a chronic disease that develops over years, the Bleomycin model induces lung changes quite quickly: around 10 days with predominantly inflammation, and then another 10 days with fibrosis (duration and overlap of these phases depend on the protocol used). And third, unlike human disease, the rodent Bleomycin model will eventually resolve.

Finally, it is quite difficult, if possible at all, to quantitatively benchmark drug candidates in this model against the approved drugs, which, to make things more difficult, sometimes do not work in this model.

While some of the readouts in the Bleomycin model can be mode-of-action specific, almost always it is of key interest to assess a compound’s effect on fibrosis. This can be crudely assessed by lung weight or more directly evaluated by measuring activation of profibrotic pathways e.g. in fibroblast cells, and, directly, by assessing deposition of extracellular matrix proteins like fibronection or collagen. These structural proteins are usually assessed using biochemical assays in lung tissue homogenates.

A key downside of this approach is that any spatial information is lost because fibrotic remodelling and any effect on it are ‘averaged’ over the tissue specimen. Although somewhat rarely used, could modern image analysis methods provide a superior evaluation method?

In pre-clinical lung fibrosis models, a key aim is the quantification of the fibrotic and non-fibrotic components across different whole lobe sections to gauge disease development or therapeutic response. Histological stains like Picrosirius Red (PSR) or Masson’s Trichrome can be used to highlight the different structural components of the lung tissue, including collagen deposition and cell nuclei within fibrotic regions, and can help with the segmentation of lesion areas from healthy tissue.

When planning a pre-clinical fibrosis study, whether the focus is lesion content, collagen quantification, cell density, or in quantifying a specific cell type such as the CD68 positive population to investigate the immune alterations, quantitative pathology techniques can help improve accuracy and turnaround time.

Each study can present its own staining or morphological challenges, we, therefore, implement Machine Learning capabilities with Deep Learning (DL) algorithms, which address the vast heterogeneity in Fibrosis model tissue and allows us to generate robust data. Furthermore, at OracleBio, we also have expert pathologists who can complement image analysis results with qualitative Ashcroft scoring.

From an image analysis perspective, it is important to understand the different components present in the tissue. In the magnified area above (Figure 1B), normal lung parenchyma (alveolar space) is visible alongside bronchial structures and blood vessels of various sizes. In Figure 1c, there is evidence of fibrotic lesion with inflammatory cell infiltration and dense collagen deposition, with most normal lung parenchyma obliterated.

When working with a processed tissue and a digitized image, the section will most likely present artefacts, therefore, OracleBio’s image analysis workflow starts with a thorough QC of each image to assess its suitability for analysis. This involves checking scan quality (focus issues), tissue quality (section folds, damage, artefacts, etc), and stain quality (intensity and consistency across the sample).

The second step involves the segmentation of each tissue section into defined regions of interest (ROI) including fibrotic lesion, non-fibrotic lung parenchyma, basal collagen structures (bronchioles and prominent vascular structures), and glass. This allows for direct quantification of lesion amount and content per section, excluding any non-fibrotic basal collagen structures in the tissue.

To do this, we use image analysis software, such as Indica Labs Halo®, which contains a Halo AI DenseNet classifier, a neural network suited for detailed tissue segmentation. We manually annotate training regions per ROI, making sure to incorporate as much context as possible and use them as input data for the algorithm, which is trained until an accurate identification of each tissue component is achieved (see examples in Figure 2). 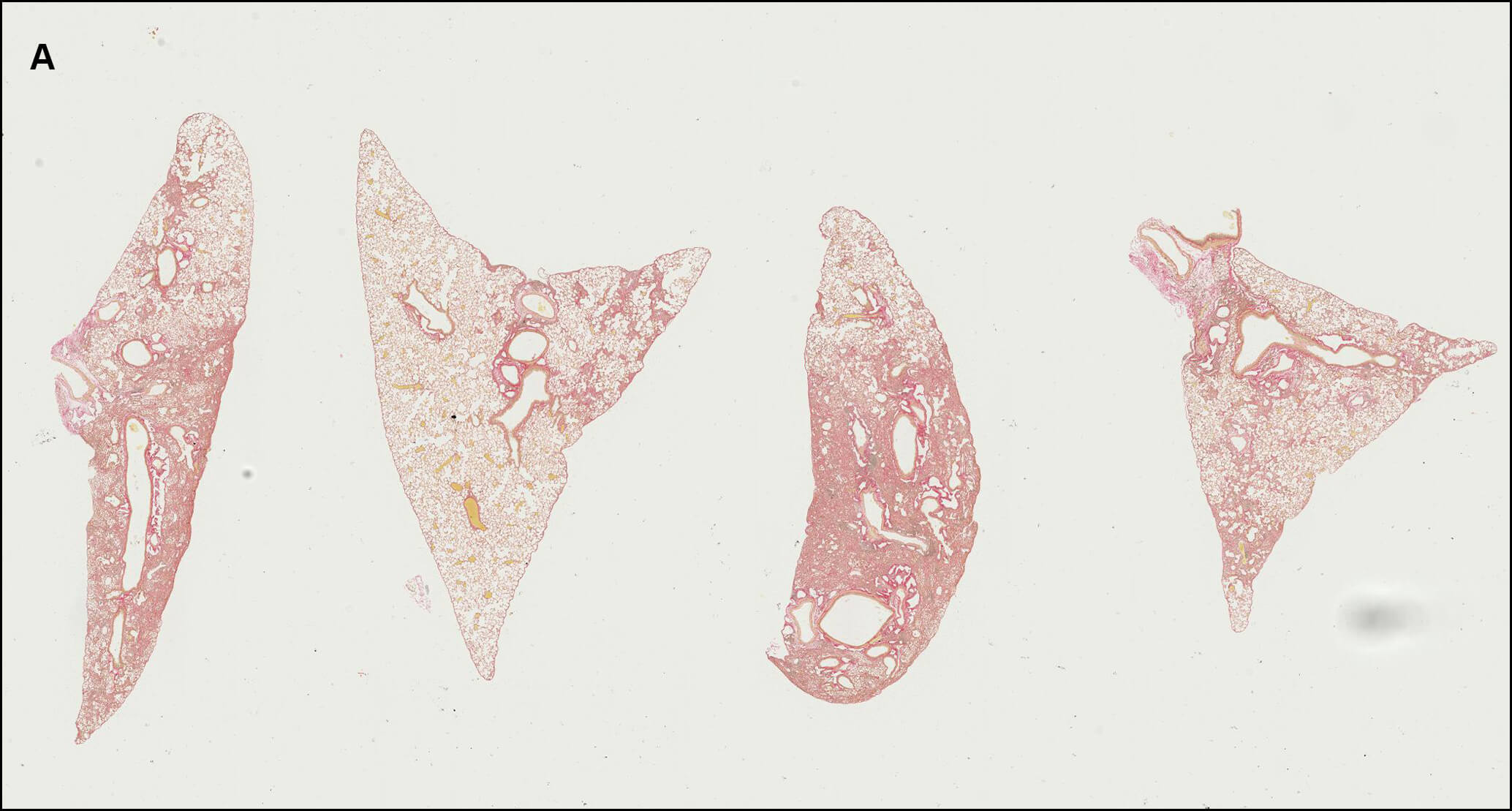 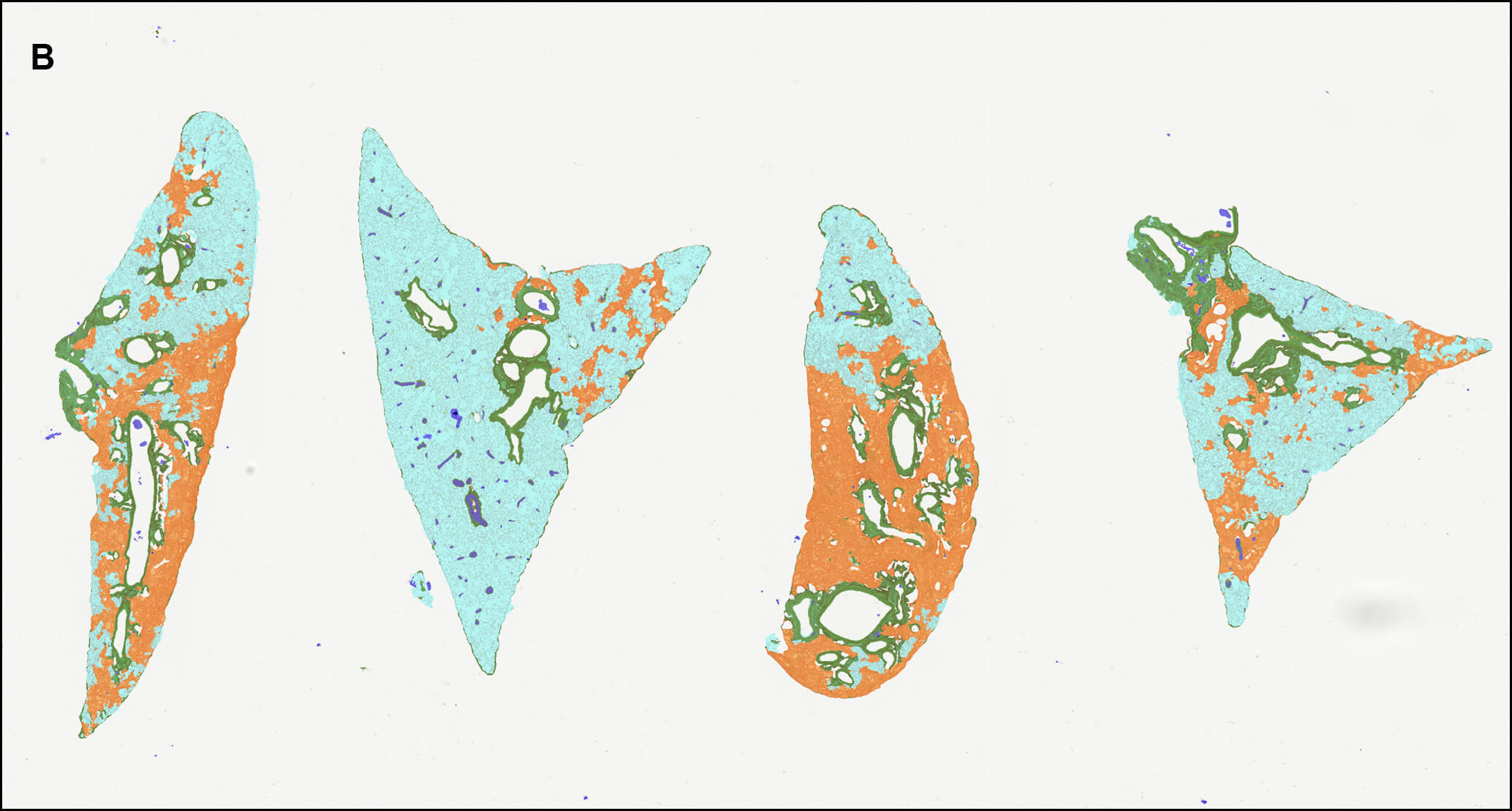 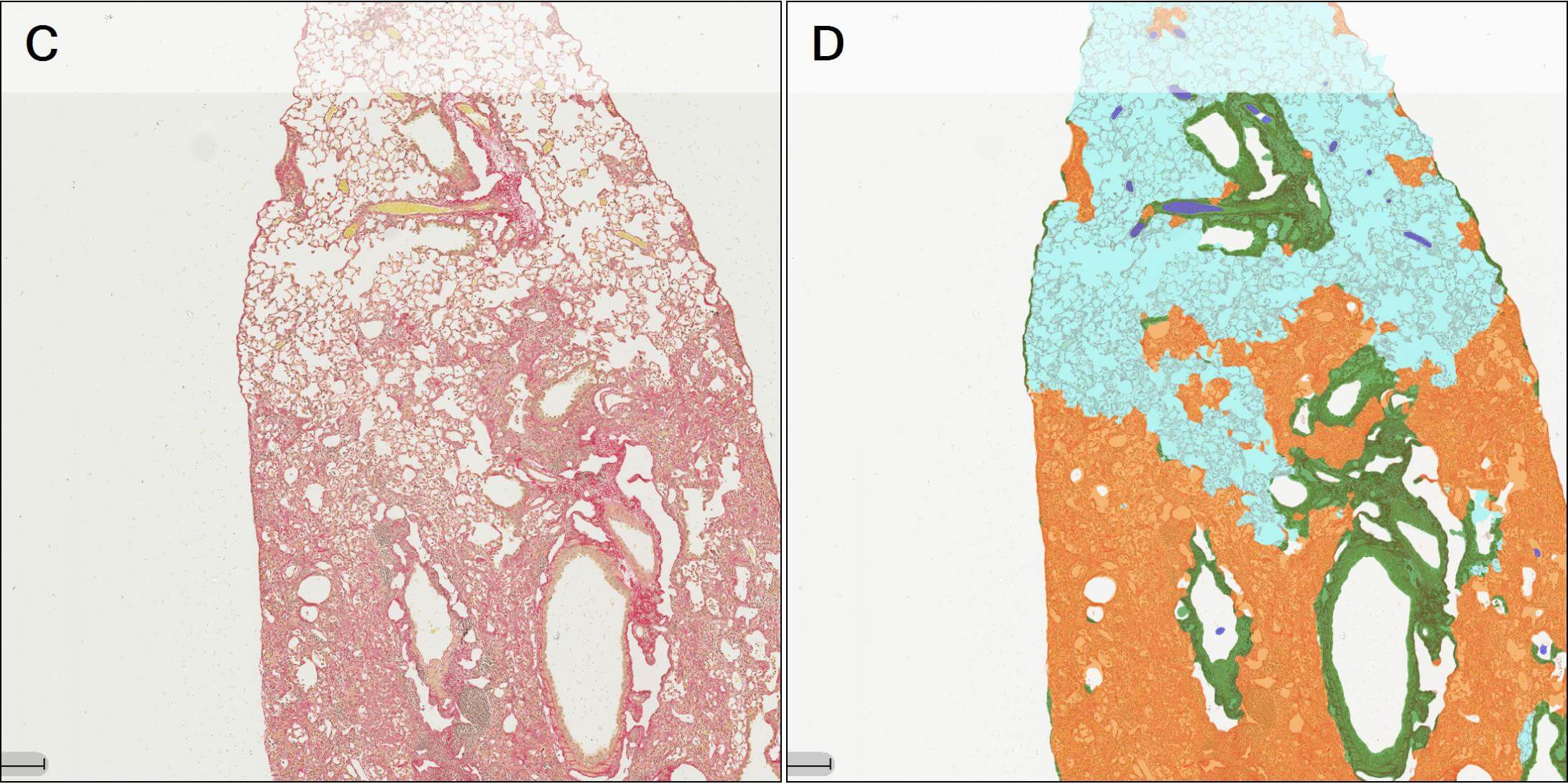 Once the tissue is segmented into ROIs, the third step involved quantifying PSR stain in both normal parenchyma and fibrotic tissue using the Halo Area Quantification App and then classifying the PSR stain into weak, moderate, and strong intensity (see example in Figure 3). Strong PSR staining is associated with more mature collagen deposits including collagen fibrils, while weak PSR staining is associated with less well-aggregated collagen and earlier collagen synthesis within the fibrotic lesion.

The separation of basal collagen components, such as bronchioles and prominent vascular structures, from the fibrotic lesion and normal parenchyma during the ROI classification stage, ensures that the collagen quantified within the sections is related directly to either the Fibrosis or Normal Parenchyma ROI, providing a precise evaluation of collagen changes across study groups within these areas of interest. 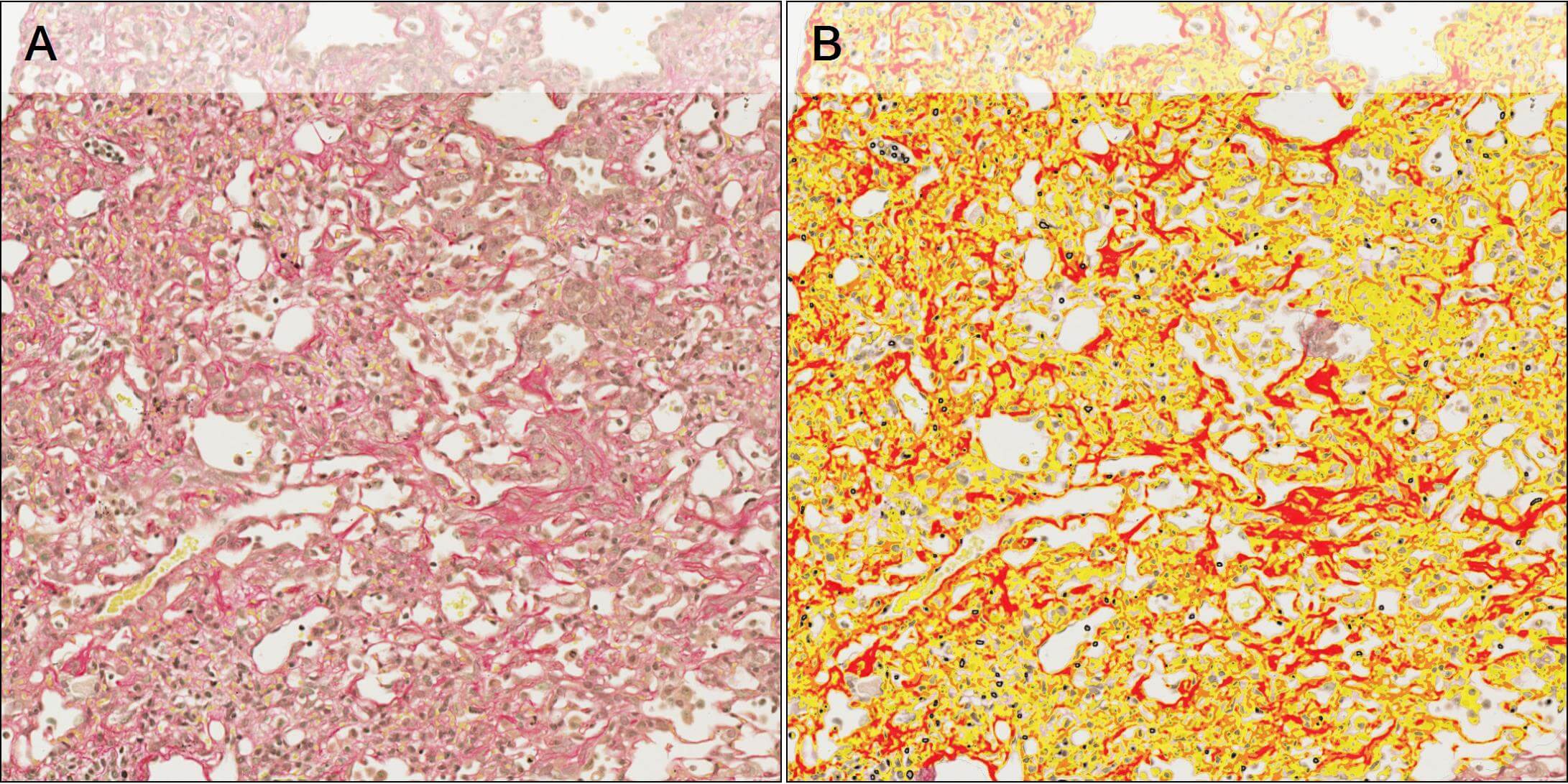 Figure 3 [Above] – A: Tissue section stained with PSR. B: PSR quantification overlay and classification into weak (yellow), moderate (orange), and strong (red).

To quantify the cell number per ROI, we develop an additional algorithm, using Halo AI Nuclei Segmentation classifier, to detect the individual nuclei present in each tissue (see examples in Figure 4). 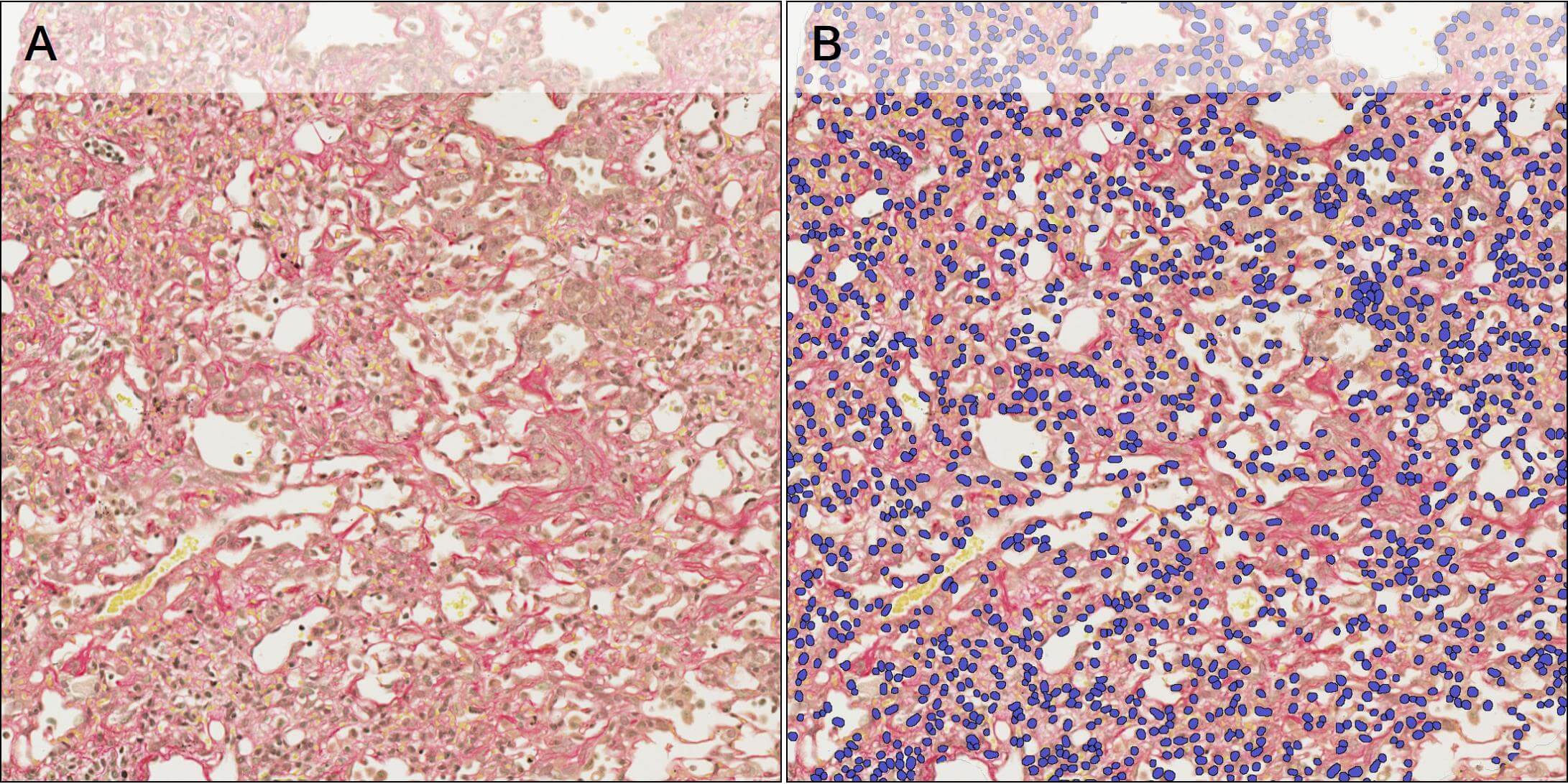 Figure 4 [Above] – A: Tissue section stained with PSR. B: Nuclei detection overlay (blue).

Example data that can be generated include:

For many drug development projects in IPF, the Bleomycin model is a crucial step in the progression of the project to the next decision point. However, given the complexity of the model and its readouts, companies carefully need to consider, strategically, the project stage at which this model is performed and, operationally, how to best set this up including specifics of the model, dose levels, comparators, and outcome parameters.

While traditional biochemical assays have considerable precedence, digital pathology has proven to be a great asset in studying lung fibrosis, from characterization to more detailed evaluation of response to treatment, enabling accurate interpretation of study outcomes complementary to the traditional approach. Also, adding image analysis could lead to a more holistic understanding of collagen biomarkers which could, eventually, offer a translational trajectory into early clinical development.

With the advances of AI, it is possible to estimate the degree of fibrosis with a precise and efficient quantitative method. Given their extensive potential in lung radiology and pathology, AI tools should continue to assist more in the future in the interpretation of lung images from histological specimens.

With OracleBio and TherapeutAix’s combined expertise, we are ideally suited to support planning the Bleomycin experiment itself as well as its analyses. At OracleBio, we are providing the highest quality evaluations, and at TherapeutAix, they have extensive experience with many providers of the Bleomycin model and its different versions; advising on an optimal design and the best provider.

Despite its limitations, the Bleomycin model continues to be an important data point and one that is required for most financing, licensing, or prioritization discussions.

If you’d like to get the best results from your Bleomycin study, or simply find out more about each company, please visit the links below:

More about the companies:

TherapeutAix is a drug discovery consultancy company based in Aachen, Germany, combining research and development expertise with a fully integrated R&D network, to deliver practical, cost- and time-effective solutions to drug discovery projects. It supports investors and project teams focus on the next step, and progress the right assets through robust decision-making steps, with a clear line of sight to the next value-inflection point and the clinic. Since its formation in 2018, TherapeutAix has successfully conducted project reviews, developed strategies, and operationalised programmes for biotech, pharma, and investors in diverse therapeutic areas including fibrosis, inflammation, and respiratory disease.

Example analysis was performed by Cristina Suanno and Lorcan Sherry at OracleBio.