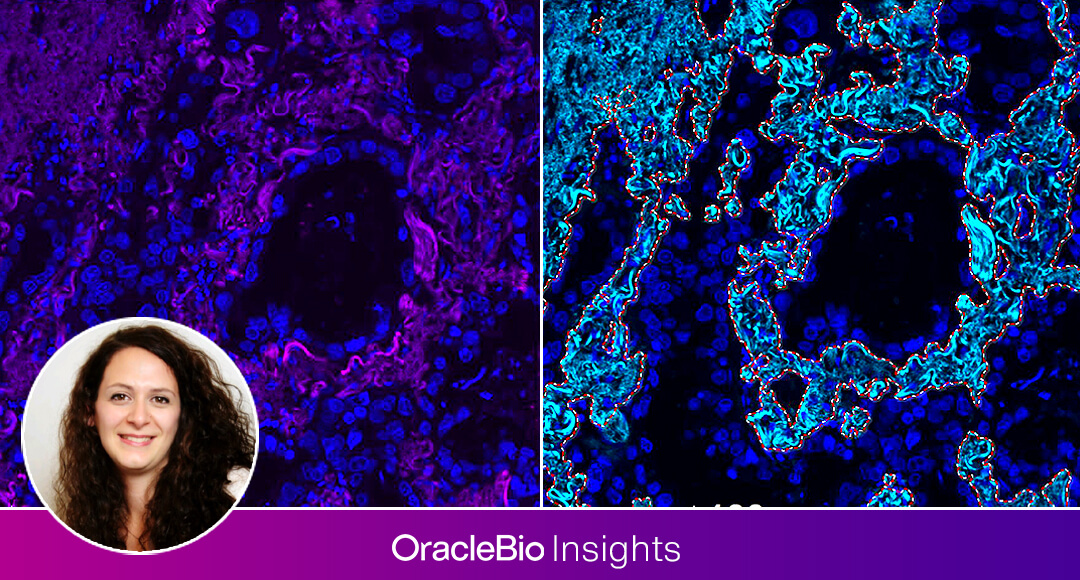 There are measures that can be taken at the tissue processing and imaging stages, as well as during image analysis, where Artificial Intelligence (AI) has proven to make a difference in terms of accuracy and time efficiency.

Multiplex Immunofluorescence (mIF) is extensively applied in tissue pathology as it allows the simultaneous detection of multiple biomarkers within a single tissue, providing data on cell phenotypes, marker density, co-localization and spatial relationships. The targets are visualized thanks to fluorescent dyes (fluorophores), and 4’,6-diamidino-2-phenylindole (DAPI) is often used as a nuclear counterstain. Fluorophores emit at unique and specific wavelengths, which results in numerous proteins that can be targeted at the same time with a high, and therefore more favourable, signal-to-noise ratio.

mIF nonetheless has its caveats, and autofluorescence is one of them.

Autofluorescence (AF) is a common issue in mIF-stained samples and refers to the non-specific background signal, which can impact the accuracy of cell detection and phenotyping.

The cause of autofluorescence can be endogenous, i.e. due to tissue composition (collagen, elastin, red blood cells (RBCs), lipofuscin tend to be highly fluorescent), or exogenous, e.g. due to tissue processing techniques (formalin-fixation increases AF by generating fluorescent formaldehyde adducts). In the example below, a high degree of background staining makes it very difficult to distinguish between true positive stains and background noise. 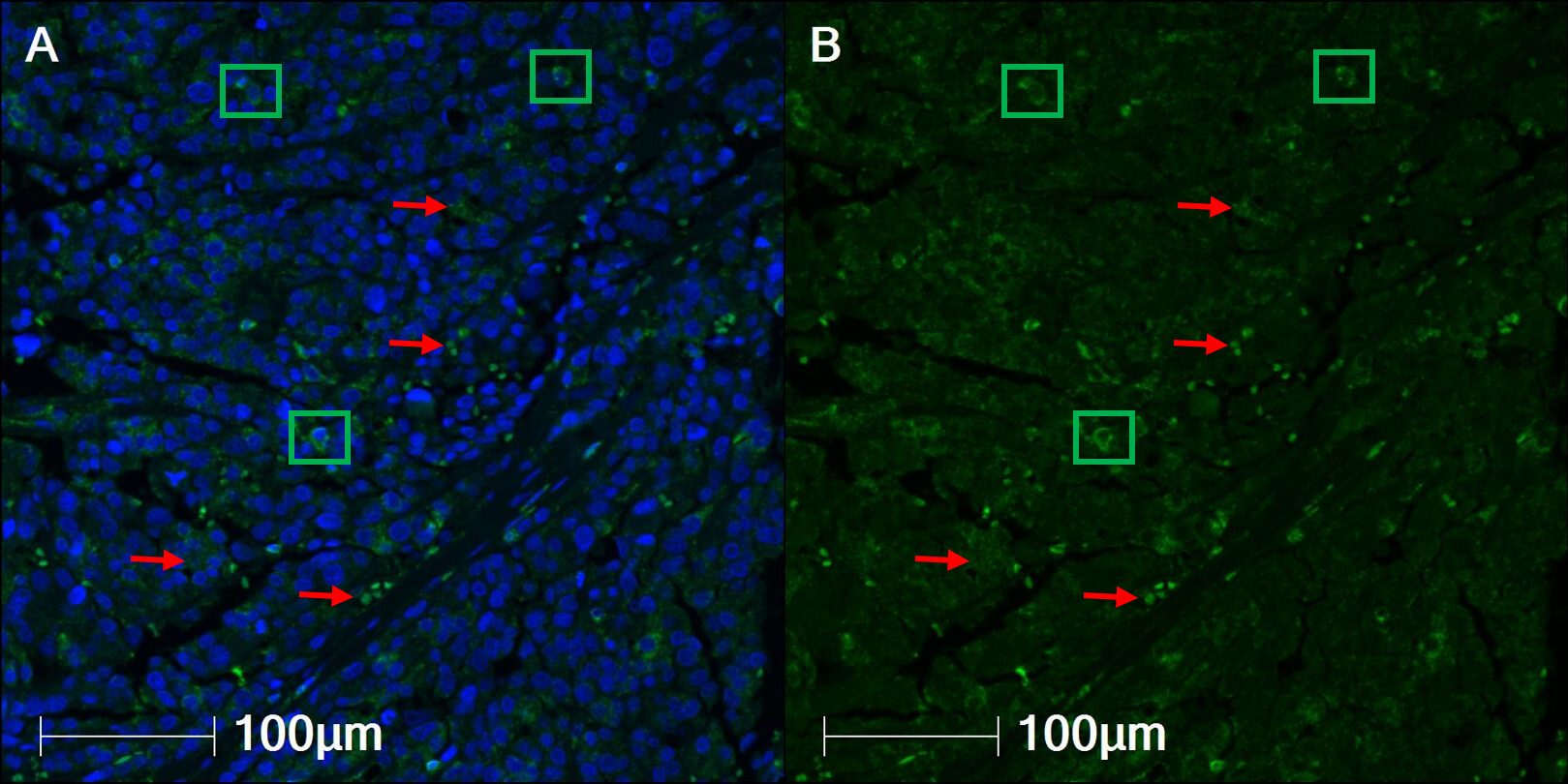 [Figure 1 – Above]: Tissue section stained with a mIF panel. (A) Showing DAPI (blue) and Opal520 (green) channels. (B) Showing Opal520 channel only. Background and RBCs (red arrows) display high autofluorescence in the Opal 520 channel, making it difficult to set a threshold to distinguish between the off-target non-specific stain and the true positive stain (green boxes).


There are a number of ways to limit AF, and measures can be taken at various stages, during tissue processing, when capturing the image, or at the image analysis phase.

Utilizing different fixation methods or optimizing the staining protocol can reduce tissue autofluorescence from the start. Quenching techniques can also be effective in reducing non-specific labeling by binding the fluorescent tissue components and masking their signal; an example is the Sudan Black solution, particularly useful in lipofuscin-rich tissues like the brain.

The signal-to-noise ratio can additionally be improved by boosting the true signal using tyramide amplification: this protocol exploits the conversion of labeled tyramide into a reactive radical, which binds the tyrosine residues of the adjacent proteins, incrementing low-intensity signal and therefore overcoming the background fluorescence.

Lastly, careful thought should be given to the choice of channels and, when possible, consider alternatives to green dyes when staining, as AF is mostly associated with shorter visible wavelengths.

At the acquisition stage, the instrument and imaging setup is crucial to implement the reproducibility of the signal recording and ease the reduction of non-specific signals.

What’s more, technologies like spectral deconvolution are now widely used in imaging, to unmix the measured pixel spectrum and build a library that collects individual fluorescent layers, including the off-target background which can therefore be visualised isolated from the rest of the on-target signals.

Finally, unstained control sections and isotype controls represent a valuable tool to determine the level of the background autofluorescence in relation to specific signal intensities and can be used for software-assisted AF subtraction to implement image analysis.

Despite the precautions to avoid AF, there are some tissue components that exhibit broad emission spectra, such as RBCs, which inevitably show up in your image as an unwelcome guest! At OracleBio we have a couple of tricks up our sleeves to ensure that only the specific signal is quantified and that the data generated at the image analysis stage is robust and reliable.

A common option offered by image analysis software is to phenotype cell types by applying mathematical Boolean Operators, a combination of AND, OR and NOT, to identify your targets and isolate them from a non-specific background within a multiplex panel.

The HighPlex FL module, offered by Indica Labs HALO® software, is no exception: it is designed to analyse mIF slides and enables it to determine phenotypes based on markers’ positivity and/or negativity. Imagine having RBCs lighting up your image in the FITC channel: depending on the amount and localization of RBCs, this could result in false-positive cell detection and significantly impact the quantification of true FITC-positive cells. The appropriate combination of Boolean operators and the channels involved in the AF can help you identify the cell of interest among the total cell population.

Nonetheless, this method requires setting a threshold for the fluorescent signal in order for the algorithm to distinguish between ‘autofluorescence positive’ and ‘autofluorescence negative’: this can be a lengthy process when you have lots of images to go through and, even worse, if the autofluorescence shows high-intensity variability.

The advancement of AI, and particularly Deep Learning (DL) algorithms, has made a huge impact on quantitative pathology. They have proven to be invaluable tools in overcoming variations in staining, scanning, and biological heterogeneity across a study cohort. Here at OracleBio, we have implemented our AI capabilities and tend to use DL algorithms in all our apps, from nuclei detection to tissue segmentation (e.g. tumor vs stroma) to artefact exclusion.

The example below shows how we used a DL algorithm to remove RBCs and collagen, fully-fledged ‘fluorescent artefacts’, that presented high autofluorescence in the Opal 480 channel, causing the detection of false positive Opal480 cells and biasing the Opal480 cell density quantification.

We used the HALO® DenseNet network, whose architecture mimics the highly connected neurons in the brain, and performs well on tasks involving tissue recognition and cell detection.

The first step to developing a DenseNet classifier; a train-by-example algorithm, is to annotate as many representative examples of the objects you want to identify, which correspond to the training data. In this case, the classifier had two classes: (1) ‘RBC / collagen’, comprising RBCs and collagen structures at a different intensity and size, and (2) ‘Tissue’, comprising all the viable tissue we wanted to analyse.

Annotations of both classes were fed to the algorithm, which was trained in the DAPI, Opal480, and autofluorescent channels until it segmented the objects of interest with high sensitivity and specificity.

A high resolution and small minimum object size helped the classifier to detect down to individual RBCs scattered in the sample. The algorithm was then applied to the Region of Interest… et voilà – RBCs were excluded from the area of analysis!

[Figure 2 – Above]: Tissue section stained with a mIF panel. (A) Showing DAPI (blue) and Opal480 (cyan) channels. (B) Showing DAPI and fluorescence (purple) channels. (C) Showing RBCs outlined by a red dashed line. The DL classifier accurately distinguished between true positive Opal480 cells and RBCs, enabling the exclusion of the latter from the area of analysis.

The same performance was seen in regard to the collagen: big and small collagenic areas of various fluorescent intensities were successfully excluded from the area of analysis.

[Figure 3 – Above]: Tissue section stained with a mIF panel. (A) Showing DAPI (blue) and Opal480 (cyan) channels. (B) Showing DAPI and fluorescence (purple) channels. (C) Showing collagen outlined by the dotted line. The DL classifier accurately annotated out collagenic structures, enabling the exclusion of the fluorescent artefact from the area of analysis.

It is possible to overcome autofluorescence in mIF-stained slides and generate robust and accurate data.

From an image analysis perspective, both Boolean combinations and DL algorithms, in very different ways, represent valuable solutions to AF and can be utilized to implement quantitative analysis, with AI technology standing out for turnaround time and adaptability to the heterogeneity and complexity of current research and clinical studies. 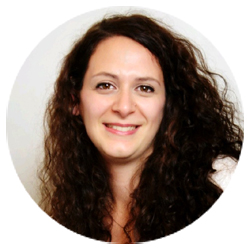