Currently, digital pathology is undergoing a revolution owing to recent developments in the field of artificial intelligence (AI). Tasks that were previously thought too complex for machine learning to be able to handle are now being accomplished and applied to great significance, in both research and industry. One such task is the digital reproduction of pathological assessments that are too subjective to be used in routine diagnostic pathology. This task forms the key aim of OracleBio and University of Glasgow PhD student Chris Bigley’s project, which is aiming to improve the prognosis of Colorectal Cancer (CRC).

Pathological diagnosis of CRC is currently performed according to the AJCC staging manual, which outlines the Tumour, Node, Metastasis (TNM) grading system. This grading system gives the clinicians an indication of how much the tumour has spread through the body, how long the patient is expected to survive in their current state, and what chemotherapy/ follow up routine should be adopted. While this has been the clinical standard for some time, there are notable issues with the system, specifically the variable survival rates within individual stages and the difference in clinical response to chemotherapy between patients presenting at the same stage.

In an effort to address this, The Edwards lab at the University of Glasgow began to look at metrics that could be assessed on the same H&E sections used in diagnosis but that are not incorporated into the TNM system. Two of these metrics are the relative stromal component of the tumour given by the Tumour/Stroma Percentage (TSP), and the local inflammatory response at the invasive margin given by the Klintrup-Makinen (KM) grading criteria. While it has long been established that both of these metrics hold great prognostic and theragnostic potential, their assessment on H&Es is subjective and very open to inter-observer variability; therefore they have yet to be incorporated into diagnostic pathology.

Segmentation of H&E sections has long posed an issue for digital pathology, and normally necessitates the use of special stains or multiplex immunofluorescence in order to assess both the stromal component and immune infiltrate on a single section. However, Visiopharm’s AI module has made applying deep learning algorithms to digital pathology easier than ever and it is this that we are using to address the difficulty in analysis of H&E sections.

Using a combination of a 7000-image training dataset from the Cancer Genome Atlas and hand annotated images, we trained a U-NET convolutional neural network to segment out the tumour and the stroma in a cohort of patients from Glasgow. Using this deep learning algorithm, we were able to quantify the stroma to determine each patient’s TSP, then use the stroma area generated by the network to quantify the lymphocytes closest to the tumour for their prognostic effect. 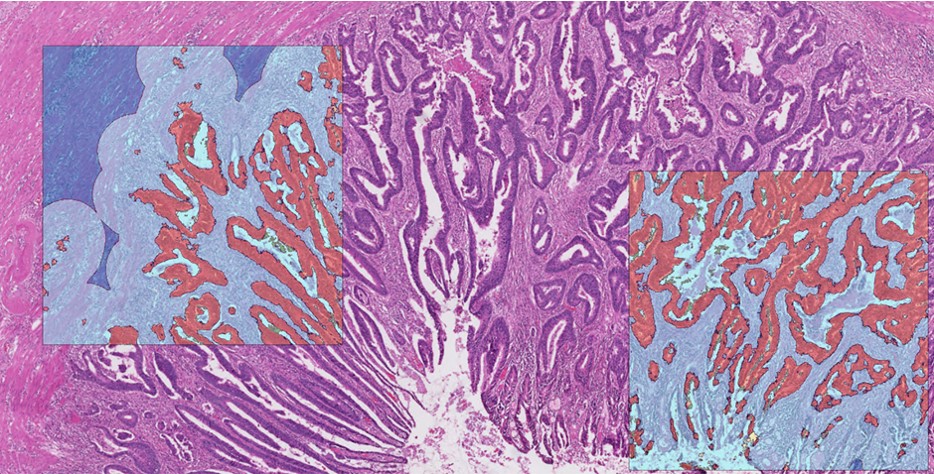 When compared to manual pathological assessment for statistically predicting survival, this deep learning approach matched the pathologist’s lymphocyte assessment but outperformed the pathologist on the TSP assessment. In addition, combining these two scores gives the grade of a classification system known as the Glasgow Microenvironment Score (GMS), which stratifies patients into 3 groups based on their survival. When the combined scores are compared for survival prediction, this deep learning approach once again outperforms the human eye in terms of statistical significance, speed, and reproducibility.

This deep learning study gives only a small glimpse into what can be achieved for pathology through the use of deep learning. There is a plethora of other tumour associated factors – Necrosis, Mucin Component, Proliferative Index to name a few – that are not part of routine diagnostic pathology due to the complex nature of their assessment. It is our hope that someday soon deep learning will provide a solution for these tasks and our ambition to be at the forefront of driving the science towards these changes, making invaluable information readily available to clinicians to make a direct impact on patients. 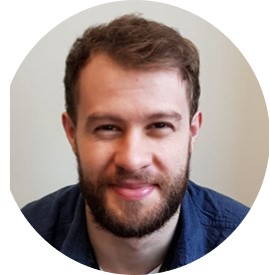 About the Author: Chris Bigley

Chris is currently completing his PhD at the University of Glasgow. His research focuses on the application of Artificial Intelligence in Pathology Research to discover, develop, validate and deliver novel diagnostics.